The role of children in contemporary islamist extremism is a topic of debate for different reasons. And rightly so. It is of great significance to include aspects of using children in psychological warfare, as children have a symbolic value and rhetorical appeal in extremist communication and propaganda. And there are several dimensions in which children tragically have been put in the spotlight when violent ideologies are turned from theory to practice and leaves nothing but grief and fear behind in its path.

The devastation escalates. Our hopes for any form of breathing space or even short-term resolution are put on hold. This week we have seen horrific suicide attacks in for instance Belgium, Iraq and Pakistan. These attacks share similarites and differences. Beyond them there are numerous others, especially in countries like Syria, Iraq, Libya, Nigeria. Every attack is a tragedy in itself.

But there is something about this past week that strikes me. Something you don’t have to be a parent to relate to. And that is the fact that recent attacks seem to strategically target children or young people (like the bomb at a soccer stadium outside Baghdad a few days ago, and yesterdays devastating blast at a playground in Lahore).

We are witnessing an increase of targeting children in spectacular attacks, often carried out by suicide bombers. The psychological mechanisms behind these type of attacks is not for me to speculate on. However considering my knowledge and experiences of researching messaging and propaganda of groups within the global jihadist movement, there are evident links between the ideological warfare and the operations on the ground.

Children are victims. And sadly they play an important role no matter from which angle you observe. As I have written about before, they are increasingly depicted in propaganda underscoring and satisfying several narratives. They are symbols of a future. Symbols of purity. As several islamist terrorist groups are millenarian (in various degree) sharing apocalyptic visions and utopias, children become equal to survival for the group and its core ideas. For instance, they are portrayed in ISIS proapaganda both as happy and peaceful (as a way to attract women/mothers to join the Caliphate and be a part of building a future beyond the current conflict), and they are also portrayed in combat and training situations as well as at school studying, illustrating lojalty, determination and conviction as a mean to strengthen the overall notion that the Caliphate will be the stakeholder surviving the apocalyptic battle of our time. Young children have recently also been used as executioners in several brutal videos coming out os ISIS media industry.

Simultaneously, children are important symbolic targets when carrying out attacks against non-believers. Christians, shia muslims, opponent sunnis – it is of minor importance. As long as an attack gets both immediate attention and effect (fear, chaos, political reaction) and symbolic value (strength, mercyless, no future for adversaries) there are tragically several reasons why children and women are potentially high profile targets. So when the bomb blasted next to a plyground, full of Christian women and children celebrating Easter in Lahore yesterday, it was not only an attack from an islamist group trying to provoce the Pakistani government and spread fear. It was also a symbolic attack with religious connotations, targeting the most vulnerable and beloved of human beings; children. 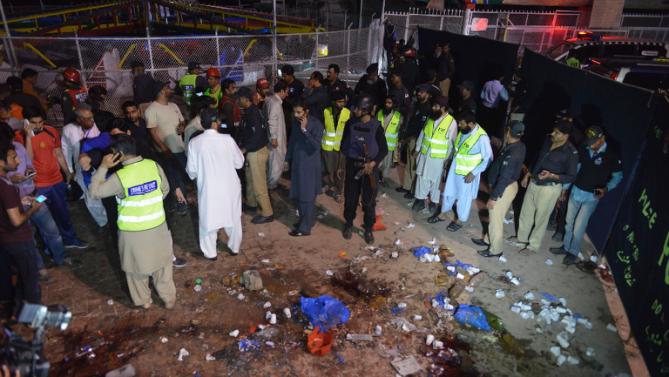 And that is an insight that no matter its importance for predicting which path current islamist extremism will follow, breaks my heart to realize.

I guess what we all can do is to spoil our children, in every way we can. Provide them with love and care.

And share thoughts to those who no longer have a child to spoil.

I feel I need to write about this.

With an academic position, which includes responsibilities to communicate research to the general public, comes side-effects. Especially when working on sensitive and politically-charged issues like extremism and terrorism. There are numerous incidents when right-wing extremists have threatened journalists and academics writing about issues concerning racism and xenophobia. I have also recevied my fair share of hatred and comments from this side since I sometimes publicly express my personal views and fear of increased right-wing tendencies in contemporary Europe.

I am all for criticism. As academics we should be able to cope with our arguments being scrutinized and our endeavours being questioned. But recently my ability to handle another, and for myself a new, form of unwanted side-effect has been challenged.

Currently I write about islamist extremism and terrorist groups’ use of media propaganda. My purpose, both in my academic writings and when I talk about it in public, is to deconstruct the mediated world view of extremist groups and contribute with understanding and knowledge about how organizations like ISIS attempt to destabilize societies through fear and shock, using media propaganda as tool for promoting their criminal enterprise of violence. Especially after the Paris attacks a few months ago I have been asked to, and often accepted, appear in news interviews and different forms of media outlets, expressing my professional opinion on ISIS. This has been rewarding and without a doubt helped gain interest for my research.

However, since then and in particular during the last month, as I have also used this blog to write about my ongoing academic work, I have experienced a mounting sense of being surveilled. Of being targeted and of interest for individuals and organizations tied to a very radical and violent ideology. And without going into details, let’s just say it’s difficult to explain as many indications are not outspoken but simply creepy in the sense that for instance suspicious accounts start to appear as followers on my social networks. Not just a few, but many. Some initiate contact, some disappear after a few days, only to have new and similar accounts appear again. When entering their profiles I see more or less explicit connections to for instance ISIS ideology and propaganda (through logos and material they share). I also see same tendencies in the statistics on visits to my blog and when (around what topic I have chosen to write about).

And to be honest it is much easier to cope with explicit rants by right-wing supporters declaring my incompetence in more or less nice words, than to know how to handle this subtle and creeping sense of being checked. Espacially since I know how extremist organizations (including supporters and more loosely tied networks) have developed their social media presence and capabilities for several years. Maybe I am naive to enter this field of research, and trust me – I have often questioned why I do it. But I have always reached the conclusion that my work can help and function as a useful framework in combatting online strategies of groups like ISIS. Although, the personal experiences and my well-being are now poking the rational self to atleast talk about the above mentioned consecuences of not only working on this subject, but being visible and open with it.

I know I will get reactions by writing this post. Probably of negative nature mostly, saying I have only myself to blame of actively choosing to accept requests for interviews etc. But my purpose is simply to initiate a discussion on how others cope with these issues. And by others I refer to academics, journalists or similar professionals who also must handle this dilemma of working with sensitive topics, talking about it and then handle consequences of the privileged position of communicating insights and knowledge in the media. Because I feel I am now closing in on the line of self-censorship. A point where I carefully weigh every word I say or write as a researcher. And I believe this is a serious threat to academic freedom and in a larger context, our increasingly fragile freedom of speech.