The bombs that went off in Boston three days ago immediately took major place in both traditional and digital media platforms. The news flow in social media was quickly filled with stories, updates, pictures, videos and condolences. The narrative structure followed the same pattern as the relatively recent high-profile events in the U.S., such as the school shooting in Newtown, or for that matter also Hurricane Sandy’s rampage. The impact of social media on news reporting has been widely discussed in the aftermath of these two events and there is no doubt that it is specifically during tragedies like the one in Boston this week that this impact becomes most clear. Even if media stories around the Boston-events follow established narrative patterns, it is possible however to now discern some changes for the better, perhaps as a result of previous criticism of the handling of information and source credibility in social media. 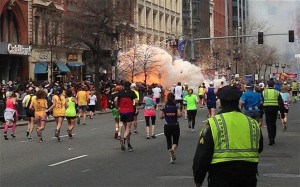 During the last few days we have witnessed a rather careful restraint of speculations on the number of injuries, deaths and possible suspects following the Boston bombs. New York Times quite early published reports that at least 12 people were killed. This information was however received with very adequate skepticism by other media outlets. When such a dominant news channel publishes this type of information, usually it has a major impact in other media. But this time there was too much information that pointed to the contrary, too much information that did not corresponded with the estimates. This does not mean that false information were spread through other channels, but a greater caution in both traditional journalistic channels in social media was evident. Media companies that previously dominated the news market are forced to take precautions regarding proliferation, partly for competitive reasons but also due to the fact that false informations linked to the organization that distributes them are deployed rapidly and the digital traces of incorrect information could damage its credibility.

Moreover, there is an interesting juxtaposition that a platform like Twitter now seems to constitute. Twitter’s core idea is based on speed and immediacy, but in the last few days users consistently have urged journalists and fellow citizens to be cautious about the speculation and rumors after the events.

Although this should not be the case, it appears to be justified to promote reminders of this kind for larger journalistic institutions which primarily operate through traditional media channels (take for example the false accusations of a suspect surrounding the school-shootings in Newtown in December last year; accusations that lasted for several days and broke every human and reasonable limits).

Another aspect of the importance of social media concerns the authorities’ work through these platforms. The Boston police has during the last days used both Twitter and Facebook pleeding for help in collecting images and movies from the crime scene in order to contribute to the investigation around what happened and why. This displays a contemporary communication pattern in which media, citizens, governments and politicians are not isolated from each other but integrated, especially in emergency situations, hopefully leading to the fulfillment of visions on a greater sense of responsibility for each other and our community.

In other words, it is possible to interpret these events as a step in the right direction where social media, citizens’ as well as public institutions’ use of them, has become a trigger to a degree of thoughtfulness and reflection. To sort, select and report information in emergency events like in this case the bombings in Boston is no easy task for journalists, especially not when journalists are no longer dominant in the news market as before. At best, this competition works in favor of democracy, although we both have and will experience how it can work in the opposite direction. But in light of what happened during the last few days, there is still reason to believe in this development as progressive. From now on, however, there is a great need to work actively to proceed this development and make progress also in the daily routine of news flow and production, where even for journalists the “smaller” events fit.