During the last weeks the US strategy againt ISIS has turned into a more decisive mode. More military actions, in close cooperation with other allies (especially the Iraqi goverment), have been taken, even if there are scepticism towards the new coalition (Robin Wright’s text in Wall Street Journal is short and direct). 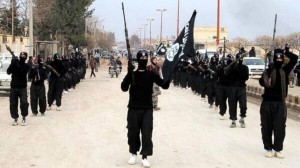 And as the news coverage of ISIS in western media has decreased substantially in comparison to just 3-4 weeks ago, the number of analytical contributions trying to explain how this organization managed to now control an area larger than Great Britain and cover more than 270000 square km, with a population around 6 million people in Syria and Iraq, are numerous. Some argue that ISIS is a result of US foreign policy in the Middle East, others emphasize their strategic use of media outlets and visiblity, and there are those who highlights their financial support from oil and distributing contacts in Turkey and Jordan. Hence, the array of explanatory factors is diverse but are not to be isolated from each other. So, lets look at a few aspects of this whole thing. This blogpost is written without a real filter. I just needed to get a few things out. So bare with me on the lack of structure sometimes.

The caliphate was pronounced in June this year, by the leader Abu Bakr al-Baghdadi. One of the rhetoric strategies of ISIS is to claim and maintain that al-Baghdadi is affined with prophet Muhammed, which also contributes to a mythologization of him (there are very few public apperances made by al-Baghdadi). Since June the growth of ISIS has proceeded any limit of fear and instability in the region and evolved into a lethal secterious movement advancing on several fronts. One could easily take the argumentation from Samuel Huntington and his famous writings in ”The clash of civilizations and the remaking of world order” (1996), in which he argued for a future (our present) as a time of increased conflict. This was written in contrast to Francis Fukuyama’s ”The end of history and the last man” (1992) in which he emphasizes the end of the Cold War and the collapse of communism in Eastern Europe as a milestone of human history, arguing for the victory of western liberal democracy to mark the end of history in ideological terms (basically saying that there will be no equivalent ideological battles in the future as the liberal democracy is superior to any other ideologies). Huntington turned against this utopian vision, and on the contrary argued for a future in which there would be an increased conflictual state of the world, however it would differ substantially from previous ones.

Within the ruling of ISIS an extremely strict form of sharia interpretation of islam dominates. Their objective is to build a social system equivalent to societes 1300 years ago, founded on the first generations after prophet Mohammed after his death in year 632. Those who undertake this objective and interpretation and strives to achive this society are ususally called wahabits or salafists. Of the estimated 1.6 billion muslims in the world, it would be fair to say that not even one percent share the pro-violent interpretation of islam according to the practices of ISIS. That is however a number that the organization attempts to increase with help of strong mobilization, public executions, military interventions, use of both traditional media outlets as well as social and digital media, scare tactics and other means necessary.

What is problematic with the ideas of Huntington in this matter, is the classification of civilizations that he makes. He divides the world in eight major cultural civilizations, one of which is solely defined as ”the muslim world of the greater Middle East”, which naturally is a very vague classification (in the same way as he categorizes a specific ”western” civilization). And as David Cameron said in a recent statement, one should not confuse islam or general notions of muslims with the operations of ISIS (”They are not muslims. They are monsters”, Cameron said in a statement on BBC a few days ago).

In either case, the geopolitical background to the growth and rapid expansion of ISIS is vital, also in relation to the argumentation of Huntington. The other day, Ibrahim Kalun wrote for the Daily Sabah:

”ISIS emerged in Iraq after the U.S. invasion of the country in 2003 and then moved to Syria. Over the last few years its ideological backbone has been its self-declared goal of defending Sunnis against Maliki’s sectarian policies in Iraq and President Bashar al-Assad’s brutal destruction of the Sunni opposition in Syria.

In this, al-Qaida parted ways with ISIS. While al-Qaida has traditionally attacked Western targets, ISIS targets what it considers to be enemies nearby: rival Sunni groups and Shiite militias supported by a mixture of patrons from Maliki and Iran to the Assad regime. This explains why ISIS has killed more Muslims than non-Muslims.” (link)

So the civil war in Syria as well as US war in Iraq are fundamental for the emergence. But there are a number of international relations in political history between states and organizations, and to be honest to a great extent based in US foreign policy actions in the Middle East, that comes to life in explanatory models of what is happening.

During the Arab revolutions since 2010, a number of totalitarian regimes fell. These dicators (Mubarak, Ben-Ali, Khaddafi etc.) have for decades used its power to oppress ethnic or religious conflicts within their respective countries. And when conflicts are silenced, the dissatisfaction grows underneath. Just imagine the sense of relief when dictators were overthrown. But the relief was also a release; a release of resting internal conflicts that now were surfaced.

For example, even further back, when the Saddam regime in Iraq was demolished in 2003, it sharpened the edges between sunni and shia muslims in the region. The former Iraqi military were mostly sunni individuals who after the dismantle of the army, were out of a job. In relation to the fact that US in 2006 placed a strong shia prime minister in charge of the government (Nouri al-Maliki), who in turn used his power to remove potential sunni people in public governing positions. This naturally caused a strong social divide between sunni and shia, where the former increasingly moved to suburbs/gettos outside Bagdad, while the city itself became a shia fortress. One can imagine the revengous and revolutionary desires that were starting to thrive within the sunni communities. All in all, integrated and then a more clear branch of al-Qaida, the sunni rebels started to form, later on totally breaking the ties to al-Qaida and emerging. Finally, the movement re-egnited when civil war was a fact in Syria 2011 (se above).

As the border between Iraq and Syria is a very porous one, ISIS started the formation in Iraq and could easily transfer jihadists to Syria and also advance there. The number of volunteers from western Europé who went to the region to join the organization, have used the Turkish border into Syria, as this one is also highly accessible. Everything mentioned so far are short extracts and parts of the development with ISIS we are experiencing now.

The use of media

However the extreme acceleration during the last few months, has without a doubt been triggered by the strategic use of media.

The use of media is interesting, both regarding gaining support/mobilize and threaten both the main enemy (infidels of the westerns world) as well as scare minoritiy groups to comply. The three recent public executions of western citizens (two US, one GB) spread rapidly on social media networks and sites around the world. Many attempts have been made to remove the graphic videos of the beheadings and urges not to share them are spread rapidly just minutes and hours efter each video has been published. The main media outlet for ISIS goes through a major umbrella media organization called al-Furqān Media.  They produce, record and distribute all media content coming out of ISIS.  Under this organisation is yet another company, called Fursan Al-Balagh Media – who transcribe all material and for example publish transcriptions of audio messages or promotion videos. There are also thousands of accounts on social media platforms with likeminded who in turn, share and produce material on their own and new networks. Above all this, ISIS has let the VICE International News Organization function from an embedded position and thereby produce material and distribute mainly to other major news organizations. Hence, the potential reach of material is unimaginable. And then we haven’t even mentioned websites for recruitment purposes only. And even if there are similar strategic use of social media by organizations like this, I am struck by the seemingly well-produced content in for ex recruitment videos, the attention to details, the efforts in creating credibility and engage the audience on different levels and the overall form (no matter the horrific idea behind it). And all this is beyond frightening.

To conclude. For every day that passes, ISIS advances. The US military strikes have started, but so far, the videos are still coming out of the region. Videos of threats to the western world as well as videos saluting the caliphat. In the middle, we stand helpless and try to comprehend the violence, the struggle for people who flee for their lives, the mind of those travelling from all over the world to join and finally: we try to understand how the region will ever recover from the terror of the Islamic State.