A country that in many ways has been neglected in media- and intellectual debates around the Arab revolution during 2011 and onwards, since the media spotlight for various reasons often fell on Egypt, Libya and Syria instead, is Saudi Arabia. This doesn’t however suggest that protests or resistance movements have not been active in the kingdom during the last couple of years. On the contrary, several social debates has been taken to the streets in different regions, especially surrounding women’s rights issues, unemployment, costs of housing etc. One of the regions that has experienced significant oppositional tensions is the Ash-Sharqīyah province. This is a predominantly shia-populated province, with a Sunni-ruling regime. Needless to say, political tensions are evident. These tensions were magnified during 2011 when parallell protests in the MENA-region accelerated in the Ash-Sharqīyah province as the Sunni regime was assisted by Bahraini government to supress the shia population.

The uprisings however differed substantially from the ones taking place in the surrounding Arab peninsula, atleast in terms of objectives. As citizens (or oppositional groups to be precise) in countries such as Egypt and Libya demanded new rule of government and a distortion of the regime itself, protests in Saudi Arabia in general, and the Ash-Sharqīyah province in particular, were characterized by demands for reforms rather than anything else. There are of course exceptions and examples of strong criticism of the political system, but still, western media coverage as well as current research being made on the Arab spring, to a large extent exclude Saudi Arabia.

Lessons learned from this? First of all, traditional media (nowadays integrated with social and digital media as well) has a lot better chance to get audience and ratings if reporting on spectacular events that are easy to understand and describe. Considering it has already taken me about thirty lines to contextualize protests in Saudi Arabia, it is not a surprise that when choosing between covering a) a ”united” people against a dictator, or b) mainly religious conflicts seeking reforms on social issues, newsrooms predominantly turns to the first option intially. As the events proceed, the media coverage spins around itself through continous reporting in almost every major news channel about the same issue and the spotlight is already set and hard to move. The domestic media system in Saudi Arabia is also a part of this explanatory model, as by law the media are to educate and preserve national identity – hence, critical journalistic approaches are as in many other countries, rare and seldom published. There is a sense of self-censorship regarding the media outlets in the country (including social media) however it is strongly, though perhaps implicitally, characterized by state regulations.

(In addition, one should know that King Abdullah at the early start of the arab revolutions spent about 100 billion dollars on domestic incentives to keep people from taking it to the streets. Several thousands of security forces were deployed to control public squares for precationary measures, obstructing assemblies of oppositional kind to take place.) 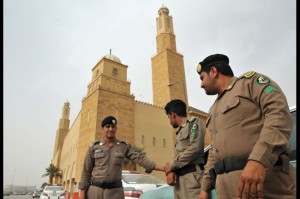 So why this take on Saudi Arabia? Well, as those of you who read this blog already know (or should know by now), my interest in the MENA-region derives from the significance of media technology in the protests, and I am keen to comprehend the use for mobilization, the media as a platform for freedom of speech, as well as the surveillance technology used by regimes to control citizens (and obstruct protests and activism). Saudi Arabia is interesting in this context due to the fact that the division between religios groups and advocates for certain interpretations of Islam (shia, sunni) really empowers perceptions about the need for technology as an arena for expressing views, community building and possibility to defend faith and religion– rather than mobilizing for a specific political change of government. The role of the media in relation to the protests mentioned above seem to have been more focused upon the promotion of dialogue about social issues, religion and ideology rather than using the technology for organizing protests offline (this was used of course, especially through mobile phones, however not to the extent as in the surrounding countries at the time).

Now, even if users and advocates for these type of religious discussions, taking place in forums and social media platforms, work hard to empower freedom of expression in the country, is must still be considered dangerous to take part in these discussions and the state exercises monitoring control, especially when it comes to religious content on social media platforms.

”Speech involving religious themes is especially risky, as the government is willing to use serious religious charges, including the death penalty and corporal punishment, and tools of international jurisprudence like extradition, to detain and punish those who violate its strict norms for political, religious, and cultural speech.”

And when researching this area it becomes rather clear that censorship of both traditional media as well as social and digital media, is often aimed at religious content and with references to Islam rather than anything else. For example, about a month ago Reuters reported on how the editors behind a forum of ”Saudi Liberals” was sentenced to 10 years in prison and 600 lashes, charged with ” cyber crime and disobeying his father” (read the story here) 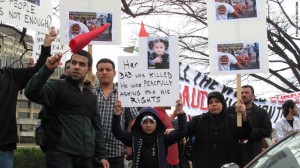 In any case, my point is to say that the role of media technology in Saudi Arabia, in comparison to countries such as Quatar, Jordan, Yemen, Egypt, Libya and Syria, during the Arab spring of 2011 and onwards, seem to have a different approach, more focusing on freedom of expression connected to religious conflics rather than, as in the mentioned countries, use of ICT for direct political change. Reasons for this are several, however the arguments above should be considered vital.