As the attacks in Barcelona continue to evolve, yet to show the full extent of the horrific actions, some reflections can and should be made. Not necessarily about the perpetrators or a potential organisation behind it (ISIS not surprisingly claimed the attack only a few hours later), but about how we perceive these type of now re-occuring vehicle attacks.

Monitoring and following ISIS official as well as supporter-based propaganda leads me to believe we have legitimate reasons for concerns regarding the imminent future. Outrage and shock seem to dominate headlines around Europe this morning, and rightly so. However the vehicle attacks are first of all nothing new, and second of all a predictable tactic. There is no point in continously repeating academics, terrorist experts and security services who collectively have emphasised that these type of attacks are inspired in the propaganda, they are convenient and ‘easy’ to execute as well as causing severe civilian damage and hugh number of casualties – hence a suitable mean for achieving a certain purpose.

What on the other hand slightly surprises me, is the somewhat naive approach to this type of method. And I don’t refer to naivety regarding preventive measures (which are taken in many larger cities to minimise the risk for these type of attacks), but to what seems to be a general common notion about how these networks and individuals can be so cruel, so cowardly causing pain and suffering among innocent civilians.

Let me make it clear, it IS extremely cruel and all respect to victims and families around them, but from a larger perspective on the method for achieving their purposes, jihadist groups in general, and ISIS in particular, have for years exhibited a toolbox of methods and means to incite fear and suffering among their enemies.

All suffering is painful, all methods for causing it are despicable. But after having followed ISIS for years, knowing about their total disrespect for human life, their extreme and horrendous methods for killing those who they believe deserve it, and understanding the role of the propaganda in this – I see strong incentives for an escalation of not only killings and attacks, but for the designated methods of cruelty as well. Why?

Because they are not only throwing people off rooftops. Nor are they simply beheading kidnapped prisoners.

They are burning people alive in cages.

They rape, trade and kill women and their daughters.

They take pride in slowly sawing off heads from both alive and dead people.

They mutilate their corpses.

They let prisoners run only to shoot them from a distance like a stray animal.

They cut off hands from teenagers.

They crush prisoners heads with rocks.

They train and let children execute.

And everything is being documented, filmed and photographed. Packaged and circulated. Often conveyed as retaliation or response to their own suffering. I have lost count of how many bodies and faces of dead children I have seen in the narrative of videos leading up to and used to justify behandlings and other methods.

These methods have marketing values, some of them have religious connotations for ISIS (beheadings for instance), some are designed to provoke, some are designed as retaliation or for strengthening the in-group identity, and some are just convenient. But the plethora of methods also speaks volume about how ISIS see the world, through history, today and from here on.

The vehicle attacks around Europe, inspired or directed, are perceived as shocking since few people know the extent and range of torture and cruelty present in ISIS ideology and actions every, single, day.

“There is no action without reaction”, is a commonly used phrase in pro-IS forums. Imagine that videos of attacks and of executions circulate all the time in hundreds of these forums, feeding and bolstering hatred towards their enemies, numbs their supporters sense and respect for human life and suffering. Of course there will be supporters who finally decides to take action.  By choosing methods that are not only convenient. Filled with so much hate and conviction, knowing you will die yourself, do you really think they will stop and think about the suffering of others? 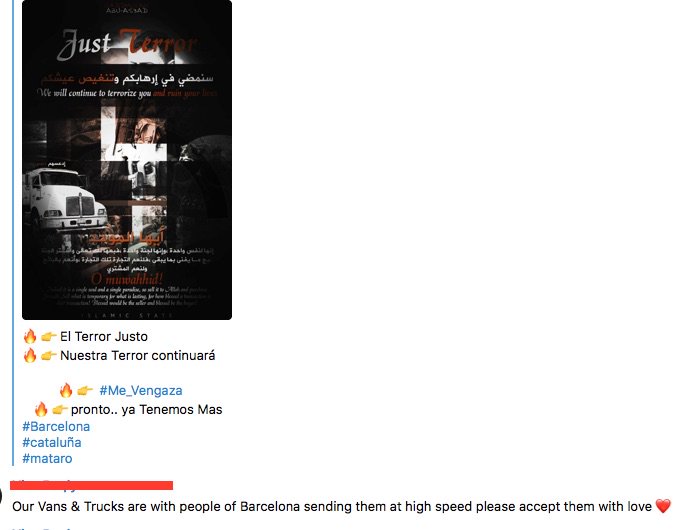 With all respect to victims of attacks in London, Paris, Manchester, Barcelona – these attacks are not surprising, and they will most certainly get even more deadly, and designed to cause as much suffering as possible. Not only in terms of casualties.

Because the boundaries between reality and fiction, between life and death, have for years been systematically blurred by an organisation like ISIS and through their propaganda.

And I don’t see why their supporters around the world would suddenly start feeling respect for the life of others.