Yesterday I submitted a final draft for a chapter in a forthcoming anthology on Video activism in the age of networks. My text evolves around the use of mobile technologies and applications to stream moving images live with a potential global reach, situated in a pretext of protests and political turmoil. The case in this text regards Egypt and the demonstrations during early 2011 at Tahrir in Cairo, one of the most recognized and symbolic events of the so called Arab spring. 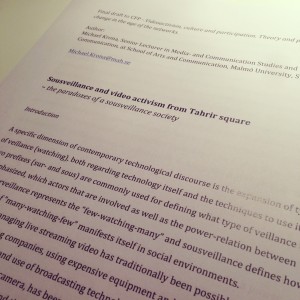 The aim of the article is to enhance current discussions on how resistance technologies, as it’s often labelled in both media- and academic debates, can refer to more than just appraisals of social media as tools for liberation or as ‘freedom technologies’, but also serve as a conceptualization of more long-term structural and social threats to society, especially an incrimination of public spheres (offline and online).

My approach is mainly theoretical, drawing on present research on media- and video activism and sousveillance society. The latter constitutes my main entry-point when trying to comprehend not only the democratic aspects of video activism, but also the consequences regarding increased surveillance practices performed by oppressive regimes in the Arab world.

For instance, I discuss the activists’ use of online video-streaming as part of a “surveillance arms race”, a battle in which activits increased use of cameras in cellphones monitoring its oppressors/surveillers, triggered the regime itself to use more drastic measures to take control of technology and information. This in turn led to activists and protesters to develop new strategies for distributing images mainly to an international audience and reach out to the international community, which naturally again led to even further interventions by the regime and police. Hence, one of my arguments is that the use of sousvillance technologies (with democratic intentions), may lead to increased surveillance by the opponent side, talking drastic measures of obtaining control, often hurting more people than those taking part in the actual protest.

Now, this may sound pessimistic or bleak. However that is not my intention with the text. My intention is to extract some key features of the “discoursive constructions of liberation technologies”, the way we think and talk about technology in a specific context, and discuss dimensions moving outside the often very optimistic nature of technological discourse (especially during the Arab spring where democratic reforms were sought). This does not mean that I oppose or don’t acknowledge the major significance that social networks in general, and online video streaming services in particular, have had during the uprisings. I have written about that as well. But in this particular text my focus is more directed on the tactics and counter-reactions from the surveillers as well, in this case states, regimes and police authorities. Using video activism as a central part of mobilising and coordinating efforts have proven to be extremely important for social movements and other organisations seeking social and political change. However it is my firm belief that if the technology are to be used as effective as possible and contribute to a more long-term change, especially in the MENA region which is of interest to me, we need to widen the concept of resistance technologies and also observe the social implications when the surveillance society and institutions react to a development.

The current outbreak and spread of ebola devastates villages, towns and countries in western Africa. Journalistic outlets are filled with information, speculation, advice, numbers, graphics, experts, non-experts and a seemingly compulsive fear of what ”may happen” if the international community can’t break the rapid spread. Few reports retrospectively emphasize the devastation the virus already created in for instance Liberia. Instead the presumed attention span of media consumers and international/western audiences is framed as short, present and futuristic at best. This allows for a majority of news journalism editors to embrace a narrow and widely dangerous sense of fear in the reporting.

Now, critics would of course suggest that it is too dangerous to send journalists to the actual countries to report from the ground (hence a lot of domestic specualtion) as well as point out that the global migration is a catalyst for a viruse to spread even further etc. Of course these arguments are valid, however there is still an underestimated need for discussing the role of journalism and sharing of information in these times, in these type of events, proceeding with major human losses, not least in the handful of countries in which ebola has now gained foothold.

I experienced the above mentioned fear when I visited NYC a couple of weeks ago during the first case of ebola reaching the US, more precisely in Dallas. I sat down in JFK International Airport waiting for my flight to London, and the television sets at the airport predominantly showed CNN live coverage of the specific US hospital that the infected person had been treated in, left from, what domestic flights he had taken, the attempts to find his fellow passengers etc. Most of the visual material in the coverage consisted of ambulances, sirens, people in protective suits, masks, gloves, road blocks and other elements fitting the story of how the virus will be a major threat to the nation and after that of course, the world. Very little attention was aimed at the original outbreak in western Africa. And I could notice how people at the tables in the airport, all intensely following the events on the screen, started talking to each other, discussing the measures of how to contain, the possible progression of events, the threat it poses. They ventilated fear and anxiety. And I thought to myself how the framing of information in times of insecurity and human crisis, so easily can expand to a ”discourse of fear”, a way of thinking and approaching a problem. 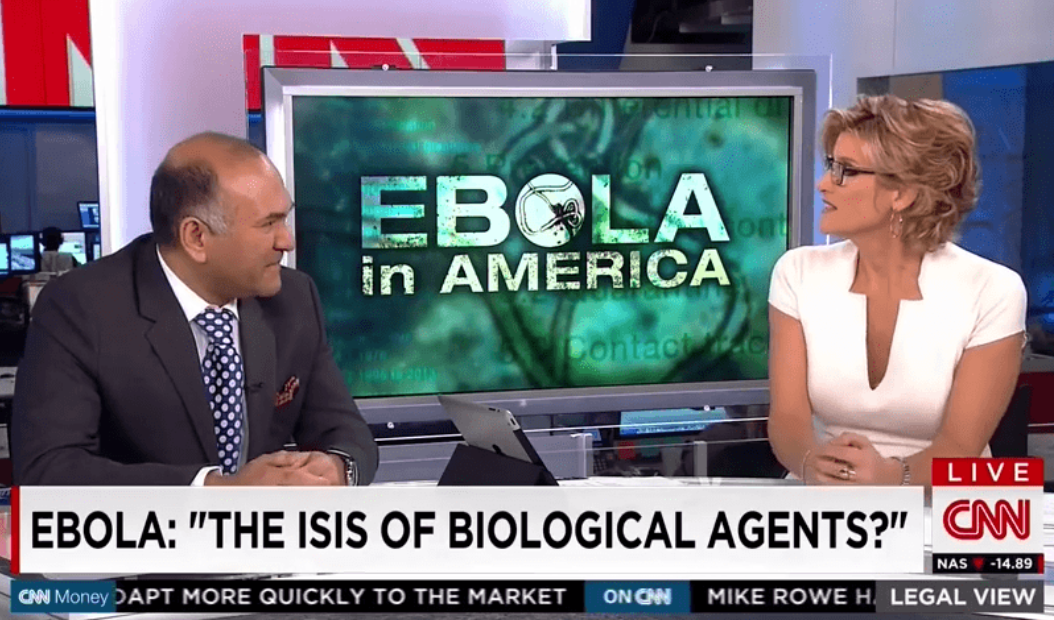 Just take this screenshot from CNN as an example. The analogy used is ”Ebola: The ISIS of biological agents?”. Now, it doesn’t really matter what is true or not, the damage in this situation has already been done as the headline connotations in contemporary society (perhaps especially in the US) are rather given and not af a positive nature. On the contrary it connotes nothing but fear and threat. Hence it expands models of thinking about ebola and in the long run of course narrows rational handling of a situation. The rather extreme graphic and message on the screen behind the two persons in the studio, I am not even going to discuss further.

But news journalism on major networks does not stand alone in this exaggerating approach. Several cases of outburst and viral notions of panic have also occured. With the exception of a few cases in for example US and Spain, the ebola virus is still contained to western Africa. This does not however stop rumours and insecurity to spread through social media in other countries around the world. In a Chilean hospital a couple of days ago, a speaker voice expressed a message to the people inside the hospital saying that they had a suspected ebola-infected person and kindly asked people to get out of the hospital and go to another one. Someone filmed this event and put in on Youtube. 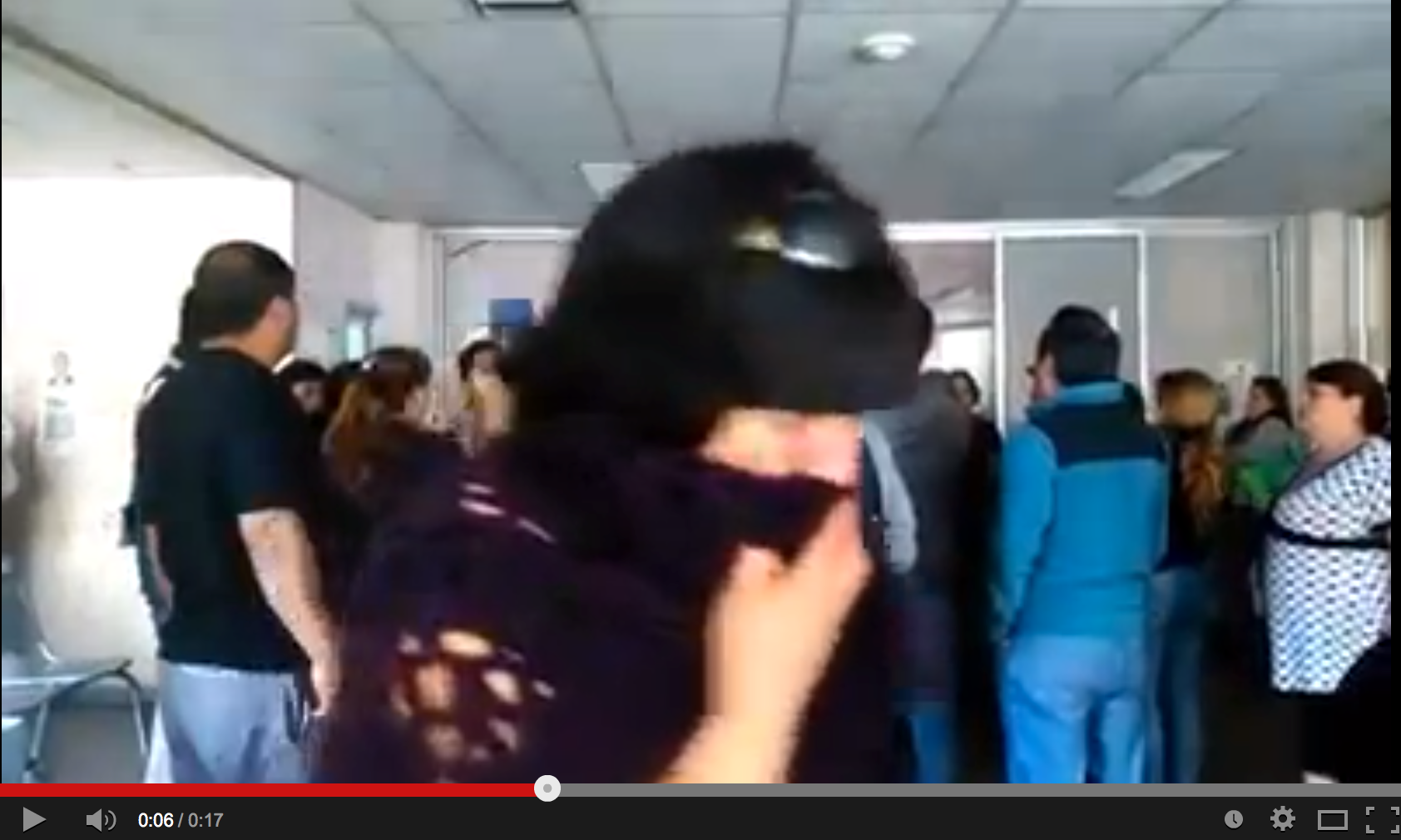 In less than 24 hours the video had been seen by 120000 people. Soon the rumour went to Twitter and other social networks. With hashtags suggesting there was now an ebola outbreak in Chile the information grew, spread and of course was also picked up by mainstream media, expanding the fear. The problem (or the relief) is that what happened, was that the patient in question had been to Equatorial Guinea (where no cases of ebola have been suggested) but someone had confused this with Guinea (which in fact currently has a spread of ebola). These are however countries over a thousand miles away from eachother.

In any case, what we are experiencing is, in all its danger, a growing sense of fear, anxiety and panic around several continents. The importance for citizens to obtain balanced and correct information does not need to be stressed further. There are of course examples of more accurate and substantiated coverage in traditional news journalism, as well as on social media channels, but the accuracy and balance in information and news about ebola, is clearly to a great extent still upp to citizens themselves to create and manage, by consuming news from several sources, wage against eachother and take action from it. And in this process, the awareness of how easily misinformation and unecessary speculations spreads, must be maintained.