Every once in a while I read books. A rather fair amount to be honest. And last week I finished one I believe could be interesting for others (which is not always the case) 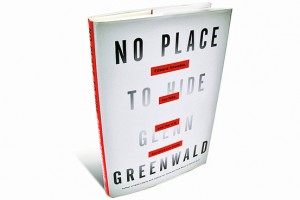 So, starting off the new year with a reflection on this book on surveillance society, named No Place to Hide: Edward Snowden, the NSA, and the U.S. Surveillance State (link Amazon), written by Glenn Greenwald.

It is a compelling story, almost like a thriller mixed with opinionmaking material criticizing the surveillance society and makes no secret of the authors compliance and cherish for Snowden. The book is basically divided into four parts concerning respectively the Snowden events, the journalistic process, the content of the released documents and finally the consequences of mass state surveillance. The latter is also mixed with some sort of analysis of the american political and journalistic system, everything made from a perspective of power transformations.

The most interesting is not how Greenwald functions as a storyteller, but rather the content of the book as a contribution in a larger political discussion on authoritative and state power exercise and how technology (ie surveillance technology) is used in these processes of upholding and expanding power and control. The justification from CIA and the US administration derives from the post 9/11-fear and mainly states that surveillance is necessary to protect US citizens. Now, there are a few problems with this justification argument. The integrity of non-americans is totally lacking but also the legal protection of american citizens is negligible. Basically, what Snowdens documents have revealed, is that the NSA has access to email conversations, phone calls, chats, social media content, and can easily get court permission afterwards to wrap up the legal justification. Greenwald argues here for a severe breakdown of the constitutional/juridical system when agencies (NSA) basically without reason are permitted to monitor citizens without substantial legal evidence.

And it gets even more interesting when his analysis of the emergence of a surveillance state ends up in a discussion of class and increased divisions in society. When rich people increase their wealth and poverty and social problems increase on the other side of the scale, a choice is given to the state. Either the political powers take measures to decrease the divisions and promote social equality, or they develop strategies to maintain a status qou and keep citizens calm to avoid civil unrest. Greenwald clearly emhasizes that many countries, and US in particular, keep going for the latter. The escalation of surveillance is an extension of this choice. To support this claim he aligns with convincing research on how any state surveillance diminishes freedom of speech and strongly weakens democratic health.

The story of Edward Snowden, the reflections and analysis of surveillance is adequate, and I believe the book serves an important purpose. No matter if you are left or right, if you support or reject state surveillance, the book still contributes with an interesting contemporary narrative on current society and especially on the relation between political state power and individual integrity within the framework of democracy.