Since ISIS and other islamist terrorist organizations time and time again have proved to conduct atrocities and preach morality in total opposition to islam teachings, including trafficking, sex-slavery, killings, forced conversion etc, it seems as we are more or less past focusing on the religious framework in our understanding of islamist terrorist organizations. I believe it is vital to see beyond the religious and theological foundation of their messaging. Their strategy to use islam as false pretext is important, yes, however a wider understanding and a way to better prepare ideological responses would be to actually start treating them as forms of mediated enterprises of violence, and their virtual operations as socially mediated terrorism. One way of doing this is to approach the conjunctures and intersections between ISIS and groups like Boko Haram, Jabhat Al-Nusra and Al-Shabaab.

For different reasons I have started looking into how other islamist groups are being influenced by the now well known information operations and media strategies of ISIS, and in addition framing this towards a contemporary history of islamist extremist communications.

Boko Haram has since the mid 2000’s used media outlets to distribute not only awareness of their existence to the world but also attempted to deliver messages of ideology, purpose and methods for achieving it. Their leader, Abubakar Shekau, has had a prominent role in the media messaging for several years. Similarities to how Al-Qaeida used Osama Bin-Ladin in the aftermath of the 9/11 attacks are evident. In simple video productions, a talking head showing the respective leader delivering a message looking straight into the camera and thereby, almost like a newsanchor, attempting to appeal for trust and reliability to what they are saying.

But as time has gone by, new rules of engagement in the information operations of extremist groups have been set in motion. In recent posts of this blog I have showed screenshots from ISIS media propaganda, including emphasis on visual imagery and strategies to attract audiences. Without a doubt, when now looking at other islamist groups established in the MENA-region, there is an increased homogenization of visual strategies and imagery in the media propaganda and recruitment efforts for respective group. Boko Haram also now has its own media centre (Al-Urwah al-Wuthqa) and at present their media messaging is very similar to ISIS, atleast in terms of sophistication in production and editing techniques (content still varies). Here a screenshot from the video ”Harvest of Spies” coming out of Boko Haram media wing. 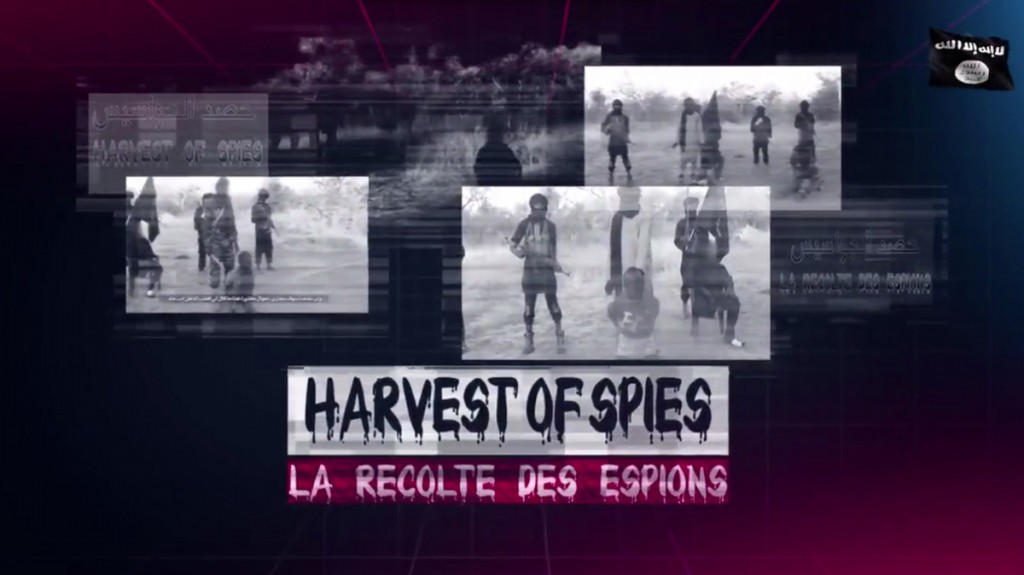 One of the most important dimensions, which now goes for groups like Boko Haram, ISIS, Al-Shabaab and Jabhat Al-Nusra, is the management of turning fiction into reality. Encoding a message with strong connotations to fiction (ie video games, fiction films etc.) and using these identification markers of imagery, typography, camera angles, editing and so forth – there is a strong and visible will to get the audience to decode and read the message through the lens provided by the extremist organization behind it. ISIS is without a doubt a front-runner in this aspect given the now widespread media industry under their control (not only inside the Caliphate of Iraq/Syria but in regional provinces as well). But let’s look at how a rival group uses the same media tactic. Below, screenshots from a recent video posted by Jabhat Al-Nusra.

The group that in many ways is most similar to ISIS, if we allow ourselves to rank ISIS at top in terms of production and postproduction value of media content, is Jabhat al-Nusra. Below is from yet another recent recruitment video, among other things showing a sophistication in lightning and mise-en-scéne.

They have, as can be seen above, almost literally adopted the visual strategies of ISIS, who during the last year used for instance drones with camera attached as well as go-pro cameras on helmets and rifles, generating a blend of reality and fiction as these techniques are examples of something being grounded in both physical and digital worlds simultaneously. One of the first examples from ISIS was their use of video-games as simulating appeals to younger recruits.

Al-Shabaab has shown a similar adaptation to ISIS media productions. Not necessarily to all narrative features within the videos, however there is an obvious relation to ISIS promotional efforts through media. Below is a capture-post for a video from the media wing Al-Katai’b Media contaning justification efforts for the Westgate attack in Kenya a few years back. 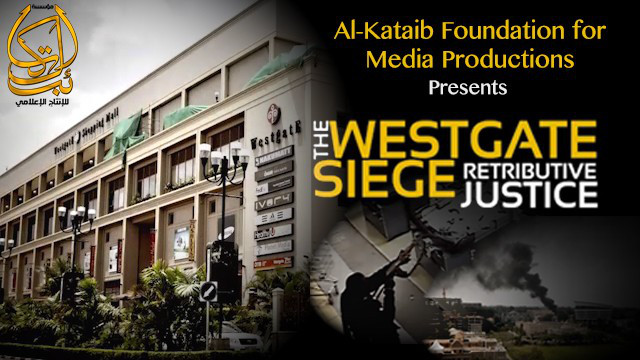 This group has, in line with the rest, increased their media production during the last two years and now hold a steady stream of messaging through different channels. However they are still suffering from lack of professionalism in their productions, making them appear as less visionary and organized than other groups perhaps. Also, Al-Shabaab operates in a different context and with different objectives than for instance ISIS, making their efforts for global reach to potential recruits a minor aim in their messaging.

So, why does this matter? Well it raises questions surrounding how extremist communication and information operations reveal relations between these organizations and perhaps speaks about the future of contemporary extremism. As their media messaging and increasingly industrial production of not only media propaganda but interactive and social media strategies, are more technically invested in than ever before, expanding our attention to the interplay between different groups becomes even more important. Only the screenshots above reveal a form of media convergence. Not always outspoken through official cooperation or allegiances, but still a convergence of communications, strategies, propaganda messaging and targeting audiences. And one of the reasons why this is important to grasp, is that it might help us to direct attention and measures towards the conjunctions and intersections between them, contributing to obstruct the expansion of these groups and making their agendas to clash rather than harmonize.

The convergence of media strategies and visual imagery are currently echoing in the virtual space and discourse of global jihadism and ISIS has set the first tone. We must break the echo before the intersections flourish into an even more physical reality.

I sometimes get accused for contributing to extremist groups agenda when replicating their material, publishing screen-shots from their videos in my work. Even if I don’t necessarily agree, I understand the opinion. It is a valid discussion.

How can we (as in academics, journalists etc) when working within fields that require public communication and publishing, avoid being part of the overall strategy of IS or other groups seeking their ideology and messaging to be widely spread, their images to be shown and their message to be intepreted in a specific way?

In any text I write, in any lecture I give or in any public presentation I create – there are always ethical considerations about what I can and should show. I make these considerations for two sakes: a) for the audience not to be drawn towards emotional disgust but instead be given the opportunity to focus on my words, and b) for caring about broader potential consequences of what I communicate. But it is tricky.

For instance, who really cares about what I write, when I also post a picture like this?

Emotions take over, cognitive schematas a drawn fast and minds are filled with prejudice, fear, shock and, let’s be honest, a vast amount of people also stereotype religion (islam) accordingly. So does it matter if I were to elaborate in an academic critical analysis of the use of children in this socially mediated terrorism after you have seen this image?
Does it matter if I say that this strategy is part of the widespread mediatized criminal enterprise of violence, communicated through channels around the world, rather than an expression of religiously justified activity? Does it matter if I say that the visual imagery is carefully constructed with the ambition to turn codes of well-known fiction into harsh reality and thereby enhancing our sense of fear whilst simultaniously strengthen ideologically likeminded, further dividing societies around the world in order to recruit more extensively?

I am convinced that for many the answer is no on all three questions. And why?

Well, I believe it has little to do with the sometimes stiff and rigourous academic way of writing. Rather it is a matter of an already established image of IS. An image that we all have participated in creating without being aware of it. When reporting on their activities, when publishing images straight from their propaganda industry, when sharing videos and posts in social media, when talking about them in a certain way and when simplifying the phenomena of contemporary extremism. Too often guided by misconceptions, lack of knowledge and prejudices.

Their propaganda is powerful. But it is mainly not due to their own networks. It has a potential of becoming even more powerful when replicated and distributed in a certain way through everyone from journalists, politicians, academics like myself and people in general with keen sharing-fingers moving the cursor over click-bait online.

Therefor it is so important that not only me, in a position of public speaker, make considerations of what and how to publish or communicate.

It must be made by everyone. With knowledge and awareness.

(I know it is provocative to publish the above picture considering the approach in this post, however I firmly believe it serves a purpose to illustrate the argument here. The screenshot is from an IS video from Feb 10, 2016).

PS. A few weeks ago I was asked to be a session speaker at The Conference 2016 . I happily accepted and last week the first 7 speakers for the August event were announced. Since then the number of visitors to my website has increased rapidly and I guess it just shows the interest for The Conference and hopefully the topic I will talk about, namely extremist communication. And I would like to welcome those of you who just reached my blog here for the first time and I look forward to meet some of you in August. DS