There are trajectories and trends in the media messaging of extremist groups emerging. Trends of use, narratives and purposes. Every day I work with and try to monitor these trends. Recently I have seen an interesting reversal of the strategies most closely connected to Al Qaeda and in particular ISIS. And even if there are more immediate and important human tragedies and brutality to consider, for a media scholar like myself it is of huge importance to also see how the operations and tactics in the conflict are communicated through various type of media platforms.

As the military interventions against mainly ISIS unfold in the region, local militias and resistance groups are advancing their geographical reach and succeed to obtain territories and cities previously under ISIS control, most recently the city of Palmyra. Much of the attention (as in mainstream western media) around this have focused on the symbolic loss for ISIS, the strategic win for militias and security forces fighting the brutal organization. But, a backdrop to all this, which for different reasons is not very well known (yet), is the strategic adoption of ISIS methodology from these groups who manage to win and fight them on the ground. As ISIS still is keen on mediating its entire machinery of military operations as well as deadly treatment of its prisoners, now this mediation tactic of exhibiting a position of strength is also played out by the opponent side. Videos and pictures have started to appear online showing Shiite militias and member of the Iraqi security forces killing and mutilating bodies of their ISIS fighters held captive or captured on the battlefield. Carefully should we approach this type of media material, and there are a great number of videos that are not genuine, but nevertheless they are significant in understanding where the role of media in contemporary conflict is heading. Here is just one example. 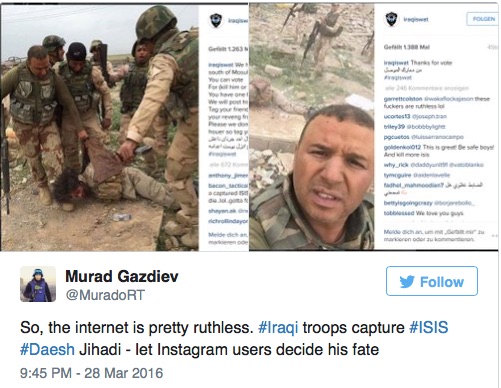 Instagram later chose to delete this account where holders of the social media account requested its followers to vote about the fate of the captured ISIS member. It stated: “You can vote For (kill him or let him go) You have one houer to vote We will post his fate after one houer Tag your friends and take your right take your reveng from isis right now. Please we dont have the time just one houer so tag your friends,”
This particular incident has though been questioned in terms of its veracity, however it is not an isolated example. Nor is it solely done with a purpose of retaliation and post similar brutality, but an expression of an increasingly growing counter-propaganda strategy with a purpose to deconstruct the powerful narrative that ISIS has produced and disseminated for several years trying to manage its visibility and enforce a perception of a strong and ever expanding state.

It is without a doubt a frightening development where the actions of achieving this is mediated, involving global audiences and only escalates an already devastating conflict in the countries where ISIS have managed to establish provinces (wilayats). One would think that the media strategies of ISIS would be seen, tragic as it may sound, as unique. But also isolated examples of modern terrorism. Unfortunately, I fear their strategies are turning into mainstream even for those who oppose them.