Last night a new IS execution video was spread in jihadist forums and through pro-IS social media accounts. It was yet another one in a row of gruesome graphic beheadings of prisoners dressed in orange suits and executioners standing behind them, dressed in black. First half of the video in English and second half in Arabic. A message to Barack Obama being read in English, and then, in Arabic, the allegations and explanations for why the prisoners now face death. The visual composition is more or less the same, the method is the same, the message is the same. We have seen it before. This time it is four Iraqi prisoners and not a US/UK journalist or aid-worker (which explains the fact that basically no western media have reported on this)

But there is a difference in this video compared to earlier. It may seem far-fetched and insignificant, but I believe it may still enhance our understanding of the relation between IS media strategies and the operations on the ground.

For the first time in this blog I now post images from the videos I am working with and have to watch. I choose as non-graphic captures as I can to illustrate my arguments. Below I put screen-shots of the four prisoners kneeling. They are reading their final prey. But three of them are then forced to witness one of their friends being behedaded first, and only two meters in front of them. This adds a layer of fear in the video, different from similar earlier videos spread during the last year. Previous examples of this type of videos have shown prisoners being killed at exactly the same time, within the same seconds, like a manifestation och collective death (reports from inside the area have argued that the explanations for prisoners being so calm before they die is that they are largely unaware of what is going to happen). 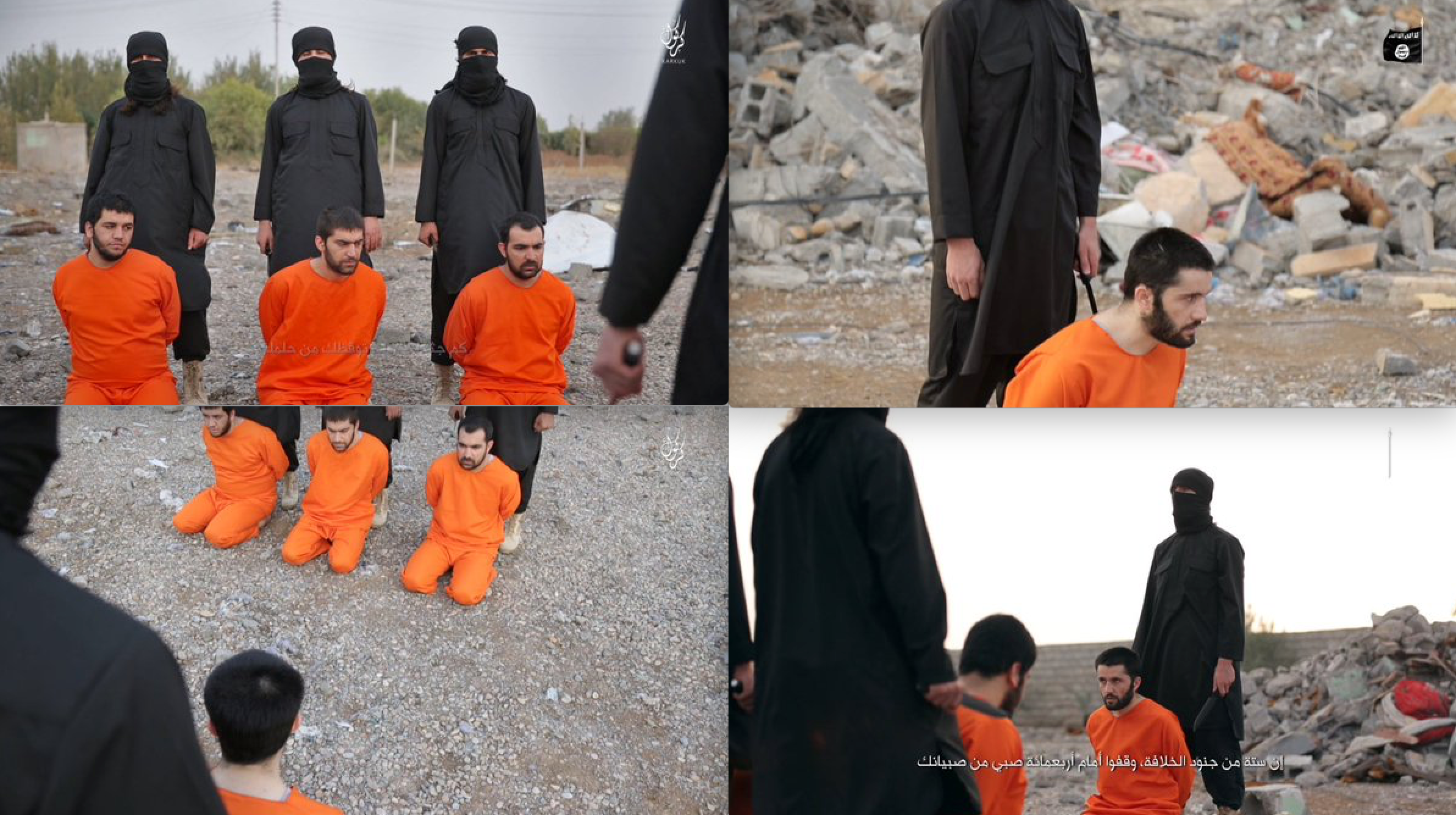 This latest video shows something else. It focuses more on the fear and horrific reactions of the prisoners watching their friend being decapitated, hence realizing what is going to happen to them. The fear in their eyes, the panic in their bodies, are given a more prominent position in the visual composition rather than the graphic effect and theatrical setting of executing everybody at the same time.

Having studied this subject for a while, I ask myself how the visual strategies and use of online propaganda like this are reflecting changes in how IS operates. Nowadays I experience that much of the brutality is beyond attempts to reach the worlds attention. Effects and high production value are being toned down for the ”message”. The herendous proof of what happens to prisoners, for those who oppose. Mentally and physically. In my opinion both visual and audio messages are increasingly becoming more desperate in its content, more frequent distribution and less thoughtful.

As the military operations against IS intensifies, yesterdays announcment to put US military on the ground in Syria naturally also intensifies the measures of desperation from IS. The video above is not necessarily a clear-cut evidence of this, but maybe an indicator. Considering the development over the last year I believe there are tendiencies for expecting an escalation on different levels. In Iraq and Syria, potential attacks around the world as reqruitment and radicalization expand, but also an increasing brutality in the online messaging and videos coming out of the vast number of media production centers under IS control.

As the level of violence continues to rise between Israelis and Palestinians, the role of technology and activist use of media intensifies accordingly. Commentators and op-eds talk about a third Intifada but in comparison to the former two, this one is much more intesively taking place online and through social media platforms as well. It is not specific for this region to deal with violence being filmed, photographed and spread online for either propaganda or purpose of gaining support (just remember the Arab Spring), however the ongoing struggles are increasingly being debated through the lens of activists’ and governments’ use of social media. And what is the most important aspects of this dimension?

Just through a fast overlook of pro-Palestinian as well as pro-Israeli websites, networks and forums, a few things stand out. (Note: this is by no means a justification for drawing attention from the actual human suffering of the conflict, nor from the historical narratives of the holy land, but a mere reminder of the role of media technologies in this conflict.)

There are different types of videos and material surrounding the ongoing clashes (some would label it murders, attacks etc.) The graphic images published on several social networks, as well as integrated in a simplified way in traditional news media, are not only grusome to its nature but also orchestrated and strategically placed. In combination with a rather hateful rhetoric from political (and religious) leaders from both sides, the videos becomes a catalyst for further escalation. Even Israeli newspaper Haaretz highlighted the increased aggression in language a few days ago. The material and videos being spread, and perhaps in particular the celebration of violence and encouraging attacks type of videos, can be seen as an extension of the political and ideological branches and structures on the conflict, of course with a strong historical development and tension leading up to it. 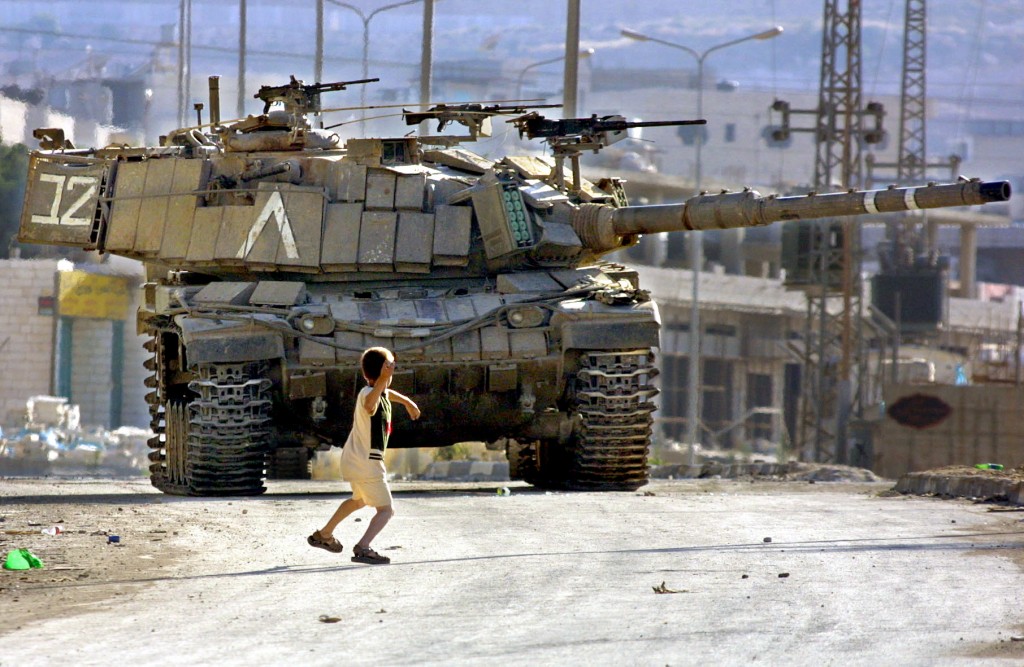 (Photo: http://www.veteranstoday.com/2011/10/25/shalit-got-off-lightly/palestine-musa-al-shaer101-the-tank-deh/ )
An interesting aspect I interpret as rooted in the religious dimension between jews and muslims, is the difference in what is actually shown. There seems to be a widespread form of resistance or objection towards exhibiting the dead (for instance victims in images or videos from attacks) within the Jewish community. But within an islamic frame, if muslims are being considered martyred they are equal to heroes, hence subject for visibility and also their story are to be told and shown to the world. This means that pro-palestinian videos frequently show dead or dying bodies as a means for not only reveal Israeli atrocities and gain support from the international community, but also as a part of celebration for the deceased. The pro-Israeli videos seem more restrictive and focus more on the actual attacks being aimed at israeli citizens or police forces, but without graphically showing deceased bodies if it can be avoided

There are also a great number of videos circulating, spread deliberately as counter evidence to official government statements from both sides. A good example is the shooting of palestinian Fadi Alloun. Israeli officials claimed Alloun had attempted to kill an Israeli youngster with a knife, however this is yet to be proved. The video seem to show he had no knife and were shot without representing an immediate danger to the police.

There are also a number of videos, photographs and tweets containing instructions on how to perform a deadly attacks with knives, and encouraging mainly younger palestinians to attack Israelis. This aspect has been widely highlighted in traditional news reporting during the last week or two, but increasing voices online question these instructional material (claiming they are from older and other contexts, aimed at totally different audiences and in other communities). Also there are videos claiming to show Israeli police placing knives next to Palestinian bodies. So it is a complex array of agendas, desinformation and propaganda right now.

No matter what side of the conflict we are on, how we choose to understand the violence, it is without a doubt a countinuation of a human tragedy in a region suffering from domestic and international conflicts for deacades. The second intifada, that lasted until 2005, was also discussed through the use of different type of media, at least from time to time. And whether or not we should label the ongoing escalation of the conflict as a third one, is of minor significance. However I do believe it is important to understand that this is not simply a palestinian rebellion, but an escalation of violence and attacks from both sides. And what makes it specifically interesting for a simple media researcher interested in the region like myself, is that the social media activism and information war taking place today is much more strategic and widespread, and plays a larger role, compared to 2005. It should also tell us something about how this conflict will proceed in the future.

Not only on the streets, but online as well.

Sometimes you manage to write something that people can relate to, attach an idea to, identify with or challenge. Earlier this summer I wrote a very honest blogpost on how researching extremist propaganda affected me as a human being. Showing vulnerability turned out to be a way for people interested in the subject to connect and ask me further questions. Initiate discussions. I received a lot of feedback and often positive response. Some of the feedback shared a sense of gratefulness for helping to understand a complex and in many ways challenging subject and especially for the way I talked and expressed myself regarding the emotional aspects of it.

And it made me wonder – if we as academics want to communicate our research (often situated within an academic institution) to others outside the walls of academia, maybe dare to personalize our processes and adapt our results/ideas, is the most efficient way?
I believe for the general public, academic research is a rather remote business taking place in a different world so to speak, and if there is anything that directly concerns society, the news will surely tell. But maybe we as researchers can contribute to bridge this by exposing ourselves in somewhat unfamiliar territories?

Since my blogpost a few months ago I have made some interviews and media appearances in which I have felt there is a genuin interest of what I do, interest for my subject (ISIS use of media activism for radicalisation and propaganda) – and I am convinced it is also a result of an openness and willingness from my side to discuss my research in different ways and in different environments. Formalized strict academic writing and publishing results in a journal for the research community is one thing, but talking to and discussing with people, parents, young adults as well as older generations, is a different thing and equally important. I believe we have a responsibility as researchers to be useful resources in bridging the gap between academia and the general public. And while fulfilling this responsibility, it evidently doesn’t hurt to personalize our communication. Sure, some people mock me, make fun of me and criticize me for being visible and that’s fine. Even good.

Because it just proves I am doing something of use.

(Note: some of my brilliant colleagues and closest friends share their research and interests on different platforms as well. Tobias Denskus, senior lecturer in Communication for Development with focus on International aid and development, has his website, and Bo Reimer, professor in Media and communication studies shares his work and interests in Collaborative media here)