A few months ago I wrote a paper proposal to a CFP on the theme Videoactivism, culture and participation. Theory and practice of social change in the age of the networks.

The other day I received the news that my proposal was accepted, hence I will submit a full paper for publication before September. The work title for this paper is currently: New forms of social control in a sousveillance society – the case of online video streaming during the Arab Spring.

What is the context?

Two prefixes (sur- and sous) are commonly used for defining what type of veillance (watching) that is emphasized, which actors are involved as well as the power relation between them. Surveillance represents the ’few-watching-many’ and sousveillance defines how ’many-watching-few’ manifests itself in social environments. The paper centers around a specific dimension of contemporary media technological discourse, namely the expansion of types of veillances – both regarding technology itself and the techniques to use it. As the title suggest I will draw upon the previous work I have done for a forthcoming book (on MIT Press later this year) on innovation, design and democracy in which I contribute with a chapter. The focus is somewhat different though, as this paper will emphasize the implications of a sousveillance society, rather than the use of live streaming technology itself. It will also be narrowed down to the Arab world and MENA-region in particular.

And my main interest in this case lies on how the path on which media technological development currently proceeds, often is characterized by discourses of improvement, advancing humanity and strengthen democratic ideals. Authoritarian regimes in the Arab world have during the uprisings since 2011 declared the need for sur-veillance in order to secure stability for its citizens, just as citizens through sous-veillance, using cellular phones, cameras and social media platforms, have adopted the rhetoric and claimed positions in the Arab public sphere and to some extent succeeded in achieveing socio-political change. 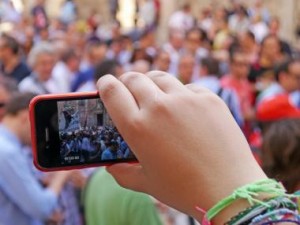 The role of online video from activists and social movements during the uprisings has without a doubt been both vital and significant. However this development also raises questions on new forms of social control, in the sense of dissolvment of former power structures (political powers exercising social control over citizens through use of surveillance technologies). Several events during the last couple of years have however shown how grassroot-sousveillance, activists filming police brutality, can be understood as a new form of this social control, making the surveillers watched and thereby altering behaviours, changing procedures for exercising politics as well as forcing new strategies for upholding power.

And through the sound of it, this may seem as a very democratic and positive development. But before making such statement, one should carefully scrutinize the implementation, the consequences of this. For example, several nations involved in the Arab spring are currently experienceing a complex and tragic aftermath of accelarating turmoil, clashes between activists and military, diffusion in the earlier outspoken demcratic reforms as well as religious and ethnic conflicts. Not to say that technology bare guilt of these, but I strongly argue that the fact that alternative political spheres (activists in this case) this extensively use social networks and live streaming video technology to both show the surrounding world of the events and encourage further resistance, at the same time forces for example totalitarian regimes on the brink of falling, to take extreme measures and desperate acts in order to maintain control and uphold the govering. This does not mean that the advantages with this balancing of veillances is neglegted, however it is vital to discuss these type of consequences.

So, to summarize, this paper will be a critical theoretical discussion and hopefully an important contribution to the understanding of the implications of contemporary sousveillance society, in this case in the MENA-region. The aim is to develop an explanatory theoretical framework on the relation between sousveillance technologies and new forms of social control in the Arab public sphere, in which power positions have shifted from government or regimes to a critical mass of new media activists.

The last two weeks have been intense, in more than one way. As an academic researcher it is usually a rarity to get the opportunity to speak in front of businesses, managers and people within the private sector in general. However as I try to be involved and accept offers from different organizations to come and present/lecture, and if the context is closely related to my work and can be considered important for Malmö University to be visible in, I usually accept and perform guest lectures or workshops related to media and communication strategies. 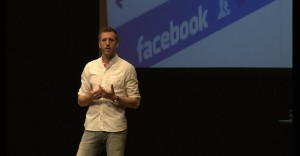 One of these guest lectures took place last Tuesday on Internet i Fokus, an annual gathering of (mostly) national small- and middlesized companies and representatives, all interested in getting inspiration and ideas for their current and future use of digital media to enhance business and communication strategies. My presentation opened the day in front of almost 400 spectators and the main topic was how companies can use social media platforms as an important part of internal communication. As several reports have shown, for example by the McKinsey Global Institute 2013, the strategic use of social media for companies in an international context is mainly external. A majority of organizations has expanded their visibility on different platforms as a mean for targeted marketing and proximity to potential customers, however not integrated social media within the company itself as a potential mean for efficiancy and improved internal communication and work ethics. During my talk I tried to emphasize the advantages with considering the characteristics of private use of sociala media (curiosity, sharing, collaboration, confirmation etc.) and implement them in a professional context. This could embrace instant feedback from colleagues, transparency, finding competences and expertise as well as collaboration across boundaries. 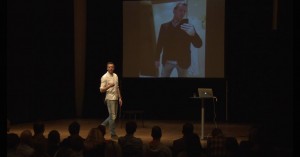 My main argument was to consider organizational cultures to be expanded in the digital world, hence strengthening individual sense of participation and belonging through the internal use of social media technology.

From the reactions I have got since this lecture I have noticed that this way of thinking was both interesting and stimulating for several people in the audience and I am happy to have got the opportunity to meet, talk and discuss the possibilities of social technology for businesses with everybody who particiapted last week and those who have contacted me afterwards. Please continue to do so.

A review of my lecture (in swedish) can be found here, and a small image gallery from this event can be seen here.