As I have read and tried to understand the Quran, I have a deep interest in trying to relate current discourses on Islam and especially those who claim an islamic faith and rhetoric however have very little to do with the actual writings of the Quran itself (no matter the justification of interpretative freedom). The emergence and continuing spread of ISIS is such an example. In this post I look into the US State Department strategies to meet and counter the propaganda machine of ISIS on social media platforms.

In an earlier post I recognized the media strategies of ISIS and the rather wide array of outlets for propaganda and mobilization efforts through the use of social media platforms. These efforts have been ongoing for years and still enjoy an increasing number of followers (not only by pro-jihadists and supporters, but a morbid curiousity by a general public as well as several academic approaches and journalists). I have written about this side of the information war earlier and you can read that post here.

But what are the countering strategies from the US as the most evident enemy of ISIS? Reports on the political actions taken by Obama along with allies in the UK and other European countries (as well as the Iraqi government) are several. What has not been very visible in the news coverage of the counter reactions to ISIS progress in radicalization, reqruitment and mobilization, especially through social media channels, is the government response on the same platforms; how the US administration are working to neutralize the exceeding radicalization strategies on the Internet. And why hasn’t this been more widely discussed?

In dec 2013 the US State Department initiated a social media campaign called ”Think Again Turn Away” as a venture to win the hearts and mind of jihadists (and potential jihadists) around the world. The stated purpose is to obstruct diasporic communities to join ISIS and other forms of jihadist organizations. The campaign started in Arabic and Urdu already in 2011, in Somali the year after and an English version was launched in 2013.  Since then, The State Department manages precense on the most popular social media platforms (Twitter, Facebook, YouTube, Tumblr etc.) and the campaign is a clear result of an increased Arabic pro-militant prevalance on English-speaking social forums. To this day the Twitter account has roughly 13 000 followers, the official Facebook page has about 8 500, and the YouTube account is followed by 2800 people (the number of views on the posted videos are often much higher though). I consider these numbers very low (in comparison to the number of attentio that ISIS has managed to get), however, the tactics used on these platforms are much more interesting.

Let’s take the Twitter account for example. Two strategies are used. 1/ writing counter messaging and content (referencig to the material being published by ISIS), and 2/ adreesing accounts in differnt ways connected to ISIS or simply pro-jihadist outlets.

The first one can be illustrated though this video (”Welcome to the ”Islamic State” land (ISIS/ISIL) ). As we have witnessed several times before, the video material coming out of ISIS media factory (al-Furqān Media) has a tone of familiarity and doesn’t necessarily have an overall confrontative approach, atleast not directly. There are other factors than just the struggle against infidels that are being emphasized. Rather, they play on a social pathos of mission, familiarity and belonging. The US State Department have chosen a strategy to parodize the content of these videos and tries to exhibit sarkasm in their approach to ISIS material. As can be seen in the video, for example a text saying “Travel is inexpensive because you won’t need a return ticket!” is showed and superimposed over a series of bloodied corpses. 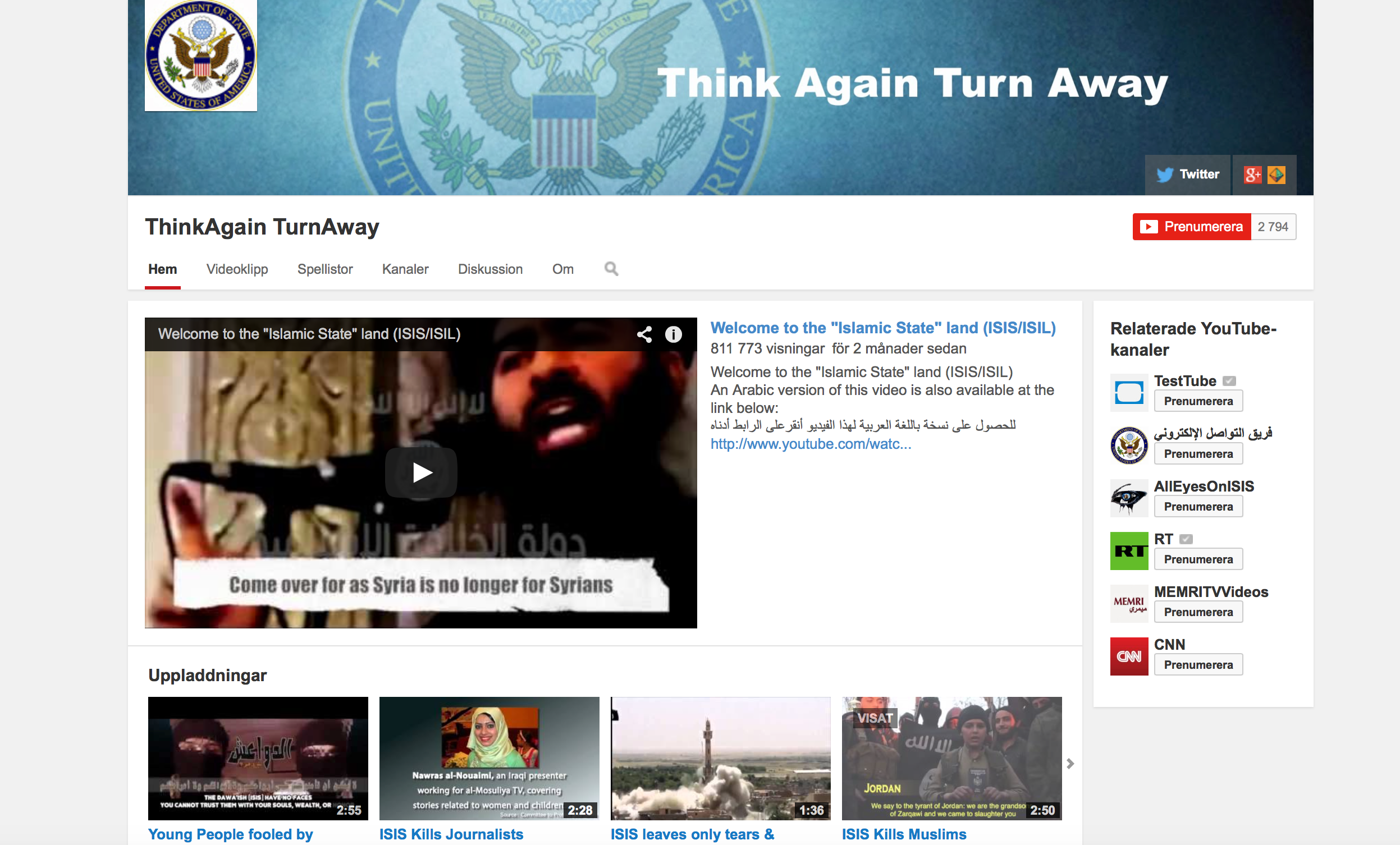 The second strategy of using Twitter in the campaign, seem to be to adress and engage discussions. This is not only ineffective, but also an immediate advantage for any type of radical group using every mean possible to spread a word and manage the public perception of their operations.  In an article in TIME Magazine in september, a couple of examples of how the Twitter account of the campaign are used as counter messaging and initiating discussions.

Illustrating these discussions is, for instance, one initiated on September 4 when an IS-supporting account, under the handle @de_BlackRose, showed gruesome pictures of tortured prisoners from the Abu Ghraib Prison scandal in 2003-2004 along with the message: “REMEMBER HOW YOU AMERICA ARRESTED AND HUMILIATED OUR BROTHERS IN IRAQ AND HUMILIATED THEM IN THEIR OWN COUNTRY!!”

Following a couple of messages of support, the Think Again Turn Away account responded, “US troops are punished for misconduct, #ISIS fighters are rewarded,” along with a collage of U.S. soldiers interacting happily with children in the Middle East.

Not surprisingly, the user, along with other IS followers, jumped on the opportunity to drag the U.S. government in a discussion about the Abu Ghraib scandal. @de_BlackRose, along with likeminded others, rebutted to Think Again Turn Away’s response with such replies as, “loool in spilling their bloods only a misconduct? Well that’s not enough,” “poor children where Americans fooling them with their smiles,” and “well only in june did isis crucify one if its fighters for robbing civilians at checkpoint.”

Even then, Think Again Turn Away persisted through the conversation, tweeting, “This is what children see under #ISIS rule, this brand of honor and respect,” and included a picture of children standing around a crucified soldier in the street of an unidentified city.

From here, over a dozen anti-American tweets were made at the account, most of which from @de_BlackRose, stating, “looool you dont know about shariah.. better think again and turn away..”; and, “i rather my children see this so they know whats their fate when they aganst shariah of ALLAH, than democazy.”

So, thirteen years into the war on terror, and almost ten years since the breakthrough of social media platforms, this type of US response and tactics surrounding social media readicalization, is to me quite staggering. By entering discussions on who has killed most innocent muslims (with a purpose of fighting radicalization of new reqruits), the US State Department not only exhibits a lack of understanding for how online reqruitment actually works, but also provides a platform and space for ISIS (or other similar groups) to expand.  In addition I firmly believe, which also can be argued from the side of ”psychology of terrorism”), that these type of countering strategies tend to trigger and stimulate young adults to turn even harder towards radical groups, hence the whole strategy backfires.

The campaign Turn Away Think Again, despite the good intentions of countering radicalization online, has developed a space to ridicule the effort itself. Even if this is not my intention with this post, I still find the whole strategy of the campaign to illustrate a lack of understanding of what mechanisms are at play in online radicalization and what characterizes the involved processes.

Efforts from in this case the US pursuing to limit the radicalization of new followers to ISIS, need to be conducted from authorities of trust and not evident combatants in waging a war of both ideological and physical dimensions. It is hard to see why efforts are not directed more to the democratic communities of the Muslim world, bridging and gain from the voice of authority that Muslim leaders around the world actually have and a faith of younger muslims who feel alienated and insecure due to domestic political faults. Enagaging in dialougue instead of countering arguments on Twitter would certainly be a far more effective way to strengthen the relation between state authorites or democratic institutions and Muslim communities around the world. This is perhaps even more important in Europe as many of new foreign reqruits travelling to Iraq and Syria to wage war under the flag os ISIS are citizens of several European contries.